Recognize and manage your negative thoughts.


Fortunately, negative thoughts have two distinguishing features that make them easy to recognize:


Use the following method to manage negative thinking:

Step 1:  Be on the lookout for automatic negative thoughts.

Step 3:  Capture them for analysis.

Step 5:  Identify the specific cognitive distortions within your negative thoughts.


In other words, use your mind as a filter. The instant an automatic negative thought enters the attention part of your mind; recognize it for what it is (a negative thought). By immediately “capturing” negative thoughts you have, in essence, disarmed them before they could do any damage. You are then free to examine them at a time and place of your choosing. 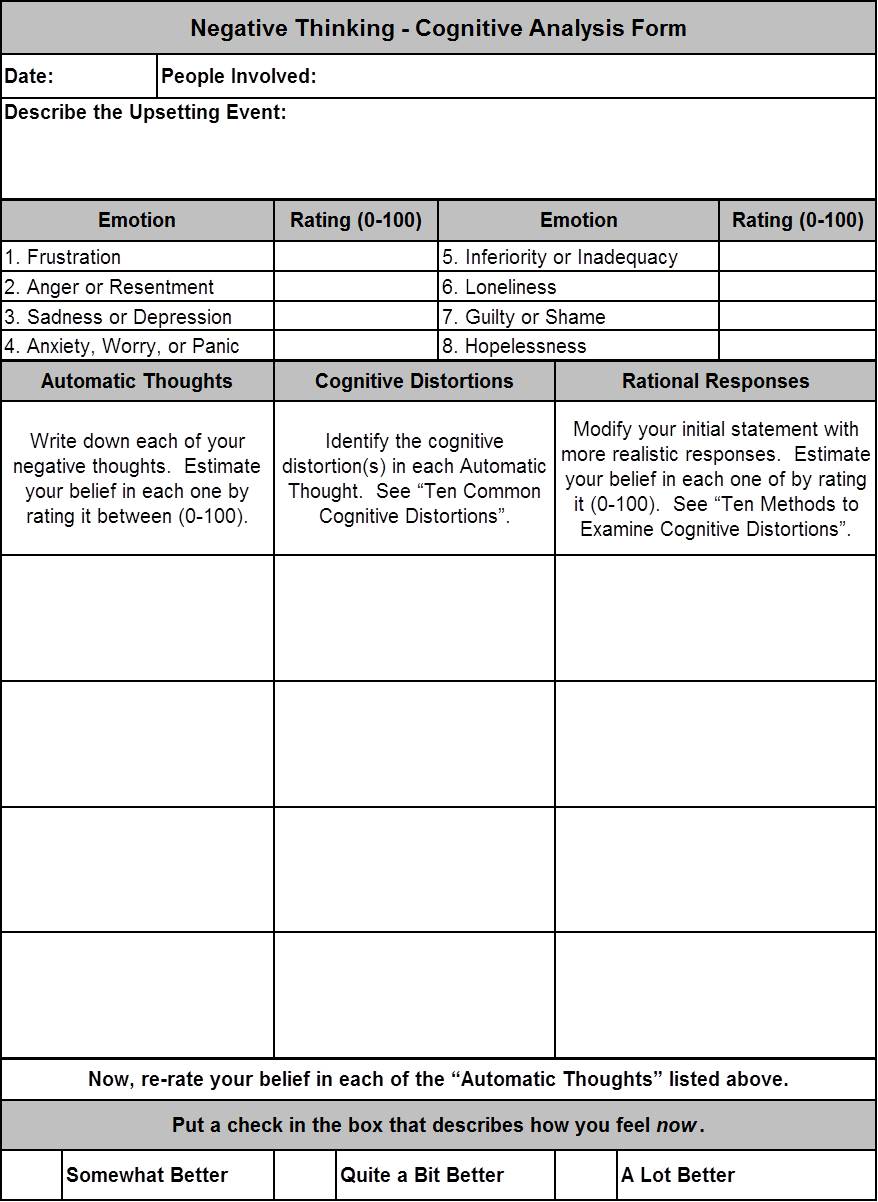 Identify your negative emotion and their sources.

Life falls short of your expectations. It might be what you do (“I keep making the same mistakes”), what someone else does (“She’s never on time”), or a specific event (“Why does traffic always slow down when I’m late?”).

You feel that someone or something is treating you unfairly. You think you are being used or taken advantage of. You know you don’t deserve the treatment you are getting and you’ve had enough.

You have experienced a profound loss: the death of a loved one, a divorce, a romantic rejection, the loss of your job, the loss of your health, the failure to achieve an important personal goal, etc. It may also be the loss of something less tangible like losing face.

You believe there is danger because you think something bad is about to happen. “What if I don’t find a job soon?” “What if I get pulled over after I leave the bar?” “What if my new boyfriend rejects me when he finds out what I’ve done?”

You compare yourself to others and conclude that you’re not as good as they are because you’re not as talented, attractive, charming, successful, intelligent, etc. “She’s so cute. All the men are chasing her. She’s got everything. I’m not even average.” or “I’ll never get straight A’s like my sister, so why even try.”

You tell yourself that you’re bound to feel unhappy because you’re alone. You think you aren’t getting enough love and attention from others because you probably don’t deserve it.

You believe that you’ve hurt someone or that you’ve failed to live up to your own moral code. Guilt results from self-condemnation. Shame occurs when you fear losing face.

You see everything as black-or-white.

If a situation falls short of perfect, you see it as a total failure. To avoid potential failures you feel that it is necessary to eliminate all of the negatives first.

This is also known as the "pilot rule": You don’t fly unless everything is perfect.

You interpret things negatively when there is no evidence to support your conclusions.

Mind reading: You can read other peoples minds. For example, without checking it out, you assume that someone is thinking negatively about you.

By doing what you feel like doing you are actually limiting your perception of the world to just it’s emotional content. In other words, by substituting your emotions for thinking, you have unwittingly become a slave to your emotions.

You assume that your feelings reflect the way things really are.

For example, “I feel angry. So this means I got screwed”.

Self-interest also has the potential to severely distort one’s scope of reality. A descent into the maelstrom of self-absorption is truly a descent into darkness. As your view of the world grows smaller, your problems appear to grow much larger, until your problems become all that you can see.

You pick out a single negative and dwell on it exclusively.

When someone or something becomes the subject of your ire you put them “down in the hole”. They usually reside there until they are subsequently dislodged and replaced by the next big negative that rocks your world.

The distortion here is quite simple, by closing your mind and focusing exclusively on your subject, you are excluding all other possibilities. The subject has, in essence, taken control of your thinking.

6. Exaggerating the Negative and Discounting the Positive

You exaggerate the importance of your problems and ignore your own positive experiences.

You blow things way out of proportion. You may see the problem as a live-or-death situation, when it could be something lesser, like a quality of life issue.

If you do a good job, you may tell yourself that it wasn’t good enough. You tend to overlook your own desirable qualities.

Exaggerating the negative and discounting the positive takes the joy out of life. It can make you feel inadequate and unrewarded.

You see a single negative event as a never ending chain of defeats.

This type of distortion can be easily detected by looking for such words as, “always” or “never”. For example, “I always gain weight when I try to quit smoking.” or “I never have any luck with the ladies.”

“Should” statements carry implied expectations. When you tell yourself that things “should” be a certain way you may be setting yourself up for disappointment.

Many people try to motivate themselves with “should” and “shouldn’t”. “I shouldn’t eat this last doughnut.” This usually doesn’t work because these “should” statements make you feel rebellious, and you get the urge to do just the opposite.

Also avoid using words such as, “must”, “can’t”, “have to”, “need to”, “got to”, etc. because they also carry unintended implications.

Labeling is a type of all-or-nothing thinking where you attach a judgmental connotation or a value-laden word to a person.

Instead of saying, “I made a mistake” you attach a value-laden label to yourself, such as; “I’m a loser” or “fool” or “failure”. Labeling is quite irrational because you are not the same as what you do. These labels are just useless abstractions that cause anger, frustration, anxiety, and low self-esteem.

You may also label others. When someone does something that rubs you the wrong way, you may tell yourself: “He’s a jackass.” Then you feel that the problem is with that person’s “character” or “essence” instead of with his thinking or behavior. You see him as being completely bad. This makes you feel hostile and hopeless about improving the situation and leaves little room for constructive communication.

Personalization occurs when you hold yourself personally responsible for an event that isn’t entirely your fault.

When a woman received a note that her daughter was having problems in school, she told herself. “This shows that I’m a bad mother.” instead of trying to pinpoint the cause of the problem so that she could be more helpful to her child. Personalization leads to guilt, shame, and feelings of inadequacy.

Blame occurs when you hold another people personally responsible for an event that isn’t entirely their fault.

Some people blame other people for their problems and they tend to overlook the ways that they might be contributing: “The reason my marriage is so lousy is because my spouse isn’t totally committed.” Blame usually doesn’t work very well because other people will resent being scapegoated, and they will just toss the blame right back at you.

Write down your negative thoughts on the "Negative Thinking - Cognitive Analysis Form". Determine which of the "Ten Common Cognitive Distortions" you’re involved with.

Don’t assume your negative thoughts are true. Stop and identify the actual evidence for and against them.

Test the validity of your evidence. For example, if you think your coach is mad at you, you might ask them.

4. Thinking in Shades of Gray

Instead of thinking about your problems in all-or-nothing extremes, evaluate things on a range between two poles. When things don’t work out as well as you had hoped, think about the experience as a partial success rather than a complete failure. See what you can learn from the situation.

Don’t putting yourself down in a harsh and condemning way. Talk to yourself in the same compassionate way you would talk to a friend with a similar problem.

Ask other people questions to find out if your thoughts and attitudes are realistic. For example, if you believe that your stage fright is abnormal, you might ask friends how nervous they felt before they got up on stage.

When you label yourself or anyone else as “a loser” or “fool” or “failure”, ask yourself this - “What is a loser?” No one wins all the time. By definition we are all losers. So it’s just a matter of degree, isn’t it? Where do you draw the line between the winners and losers? Where does someone else draw the line? It’s purely subjective.

Simply substitute less colorful language for words and phrases that are value-laden, emotionally loaded, or that carry unintended implications. This method is very effective at modifying Overgeneralizations and Should Statements. Instead of telling yourself, “I always screw up.” you might say, “It would have been better if I hadn’t made that mistake.” This method is helpful at modifying statements containing the words such as: “always”, “never”, “should”, “must”, “can’t”, “have to”, “need to”, “got to”, etc.

Don’t automatically assume that you are “bad” and blame yourself for everything that goes wrong. Think about the many factors that may have contributed to the problem. See what you can learn from the situation.

You can also do a Cost-Benefit Analysis of believing in a:

Disclaimer: People who are suffering through bouts of depression, anxiety, or any other mental health issues. Please seek professional advice.